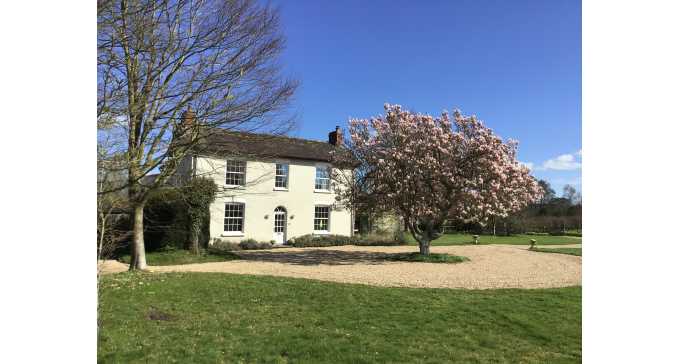 The front of the house. 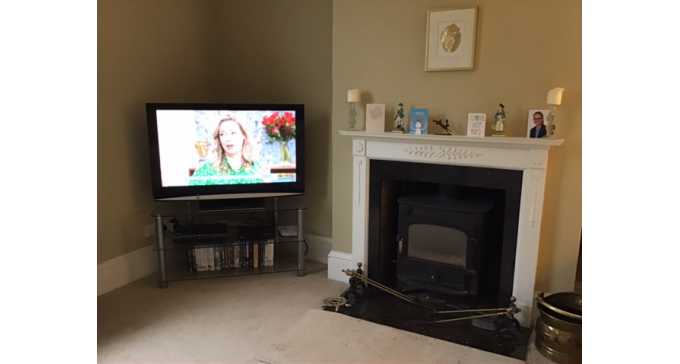 The Snug with the television 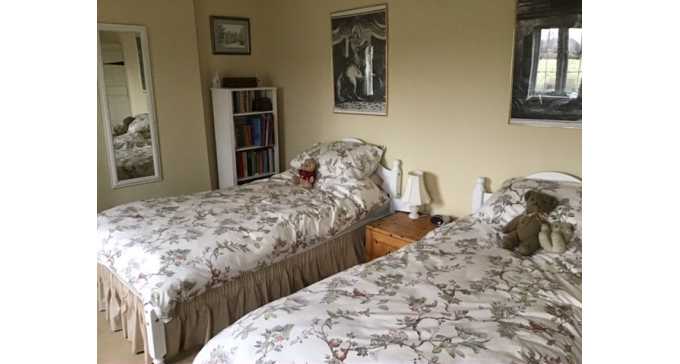 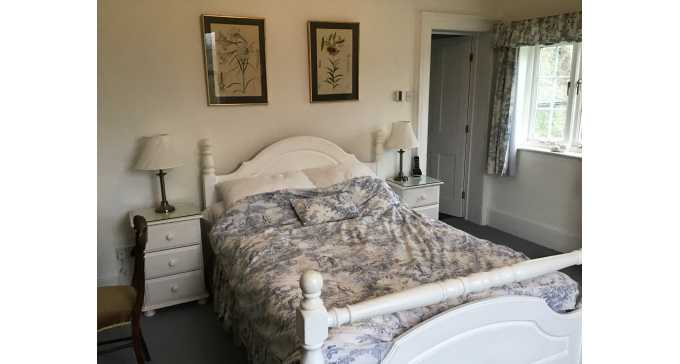 One of the double bedrooms 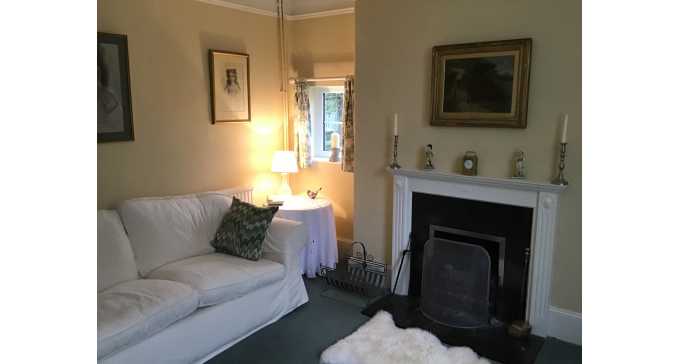 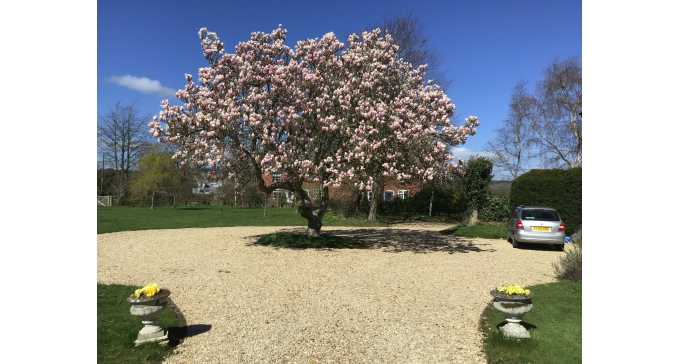 The magnolia tree in full bloom in April 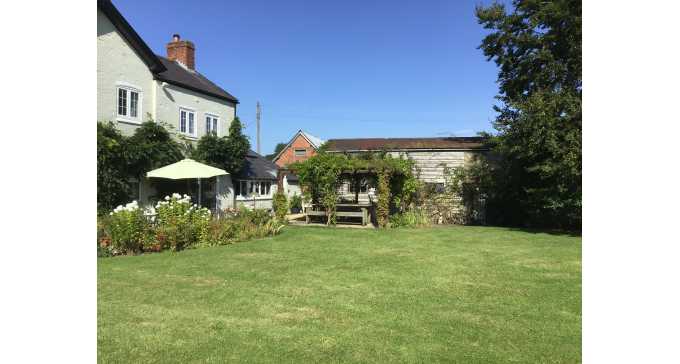 The back of the house with the pergola and stables. 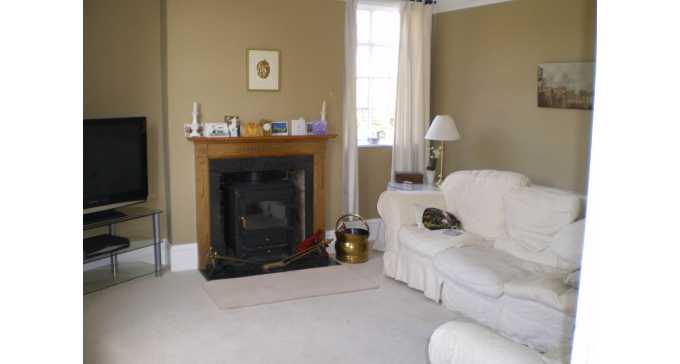 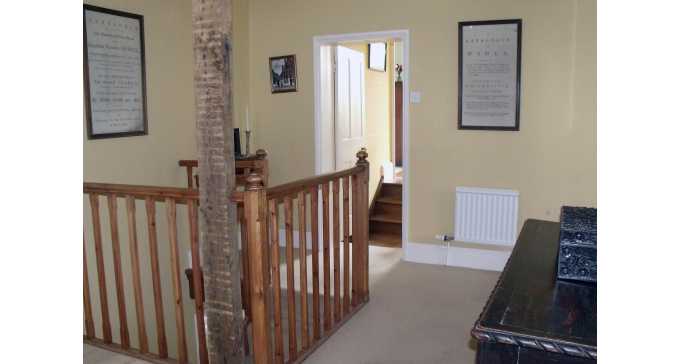 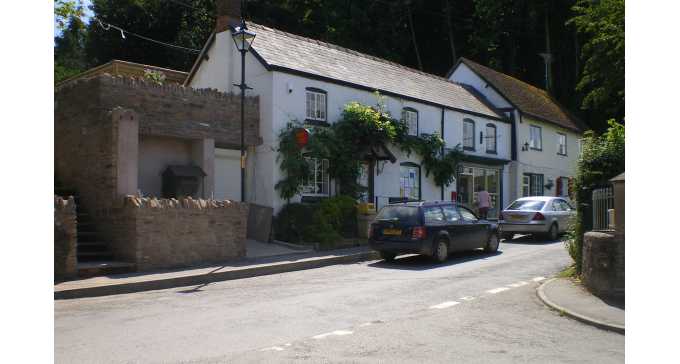 The oldest part of Comberton Court probably dates back to the 16th or 17th century when it would have been a small, half-timbered cottage, the original end wall of which is still visible inside the house. Its 18c owners, who made money from farming its then 100 acres, added an impressive two-storey Georgian extension, complete with its own oak staircase, while what is now the kitchen was probably a 19c dairy. The whole house has been fully restored with the home comforts of 21st century living but with all the period features lovingly preserved.

The house stands on the edge of the pretty Herefordshire village of Orleton, six miles from Ludlow to the north and six miles from Leominster to the south. It now sits on just two and a half acres (though this is enough for us!) with its own driveway and ample parking space.

Downstairs there are two sitting rooms, a formal dining room, a music room, a parlour, a downstairs cloakroom, kitchen and utility area. One of the sitting rooms and the music room both have wood stoves and Sky TV. As the house has been extended at different times, there are no fewer than three staircases. Upstairs, the master double bedroom has an ensuite bathroom, and there are then four more bedrooms, two doubles, one with twin beds and a single bedroom which also doubles as the computer room. There is a family bathroom for the benefit of these four bedrooms. As we are grandparents, the house is reasonably child-friendly, with some toys both indoors and outside.

Outside, thereâs a pergola where you can eat overlooking the flower bed and the very large lawn. There is a row of old wooden stables, which provide lots of outside storage space. Our field used to be a traditional apple orchard which we are replanting with ash trees for firewood, as well as with oak and sweet chestnut trees. There`s a stream at the far end of the field, though as this is securely fenced it`s quite safe for children. Thereâs a vegetable garden behind a hedge. We encourage the local wild life as much as possible and try to garden organically. The place is full of all kinds of birds: so far we have logged 24 different species and are still counting. We`ve just added a merlin and a red kite to our list.

Orleton is one of the most attractive villages in Herefordshire, full of black and white timbered houses. There is a village pub, The Boot, which is owned by the community and which does great pub food. Thereâs also an excellent village shop and post office, together with a school and a doctorâs surgery. Weâre situated six miles south of the town of Ludlow, which the poet John Betjeman called "the perfect historic town", and which is famous for its restaurants, its festivals and for its listed buildings. There is a market in the centre of Ludlow most days, and a fortnightly Farmers` Market. You can read more about what Ludlow has to offer at http://www.ludlow.org.uk. and "letsgoludlow.com

The surrounding countryside is very beautiful. Weâre not far from both Wenlock Edge and the Long Mynd - A.E.Housmanâs " blue remembered hills". The Malvern Hills and the North Cotswolds are both about an hourâs drive to the east while the Welsh border is only 12 miles to the west. From there you can get easily to the Brecon Beacons and the Black Mountains.

From May onwards, there are lots of country activities, such as country shows, food and music festivals, not to mention historical re-enactments and displays of jousting and falconry. Malvern Flower Show in May, run by the Royal Horticultural Society, is nearly as grand as the Chelsea Flower Show! There are great houses to visit such as Hampton Court Castle (which pre-dates Henry VIII`s Hampton Court), Berrington Hall, Stokesay Castle, Ludlow Castle and Croft Castle and gardens aplenty. Shrewsbury, which is one of England`s finest medieval market towns with over 600 listed buildings and which is the setting for "Cadfael", lies an hour`s drive to the north, while you can reach Chester within an hour and a half. Here you can walk round the old city wall, visit the wonderful 11c cathedral and the unique double-storied 17c shops.

If you like the theatre, Malvern Theatre has many pre-London productions and is about 45 minutes away. The Royal Shakespeare Company at Stratford-upon-Avon and the Everyman Theatre at Cheltenham are a little more of a trek - about an hour an a half each way, but we do go to matinees at both on a regular basis.

Weâre experienced exchangers and being retired are happy to be flexible with regard to dates. So if you think that you might like to come to Comberton, please do get in touch. I always reply to every email.

Weâre looking for exchanges within England, Scotland or Wales this year. 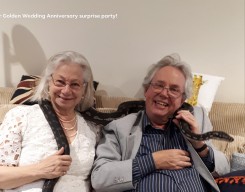 We`re experienced exchangers, having completed 40 exchanges over the last 30 years. We started when our children were teenagers and we enjoyed it so much that it`s become part of our way of life. Now that weâre both retired (teaching and working with children and families), we wanted to explore the world further and used to be very much open to offers, particularly to Europe of one or two weeks.
Sadly because of Covid we have had to restrict our exchanges to England this year.

We have a son, daughter-in-law and two grandsons aged 9 and 7 settled in Adelaide, Australia so we may be looking for exchanges there or to cities such as Sydney or Melbourne where our Australian family could join us for a short while, once it becomes possible to fly again. This may not be until 2022!

I always reply to every email so if you might be interested in a holiday in a very English country setting, I would love to hear from you.

Our photo, by the way, was taken at our Golden Wedding Anniversary in Adelaide where part of the entertainment was a presentation of native Australian animals, including a very friendly 10 ft carpet python!