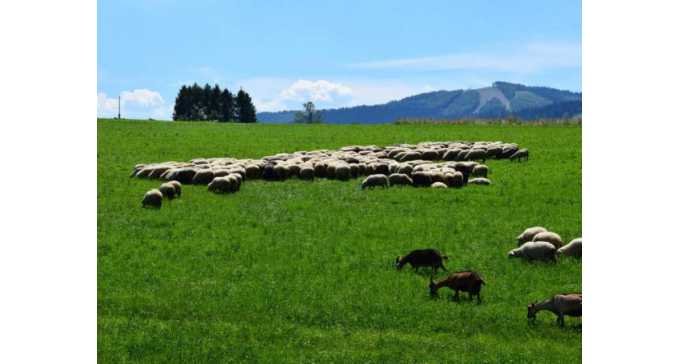 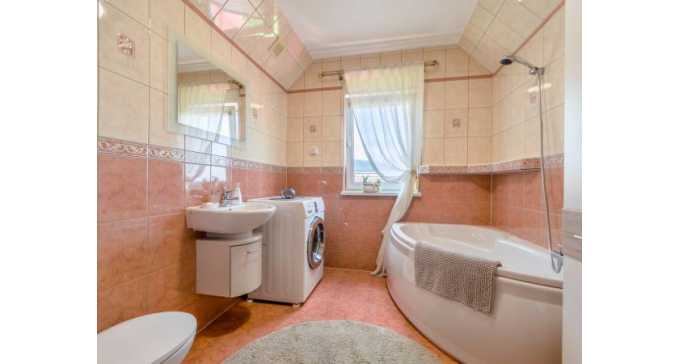 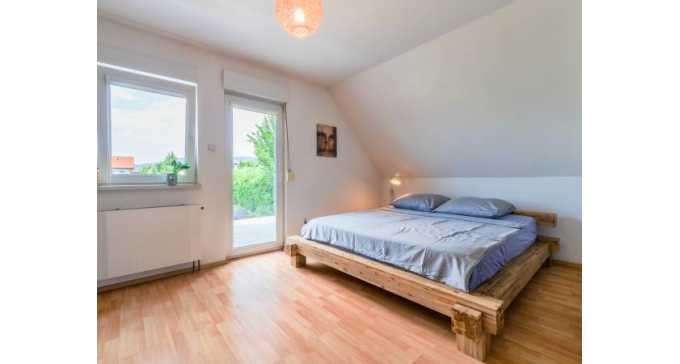 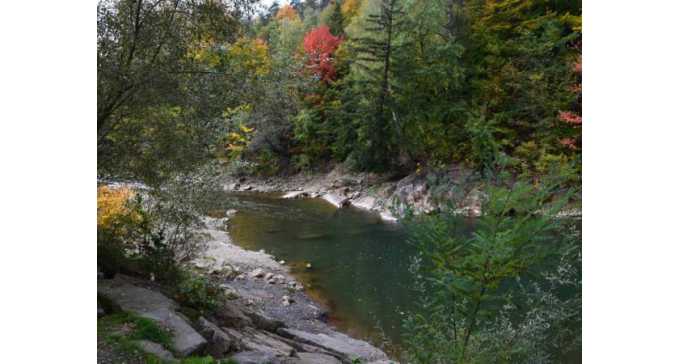 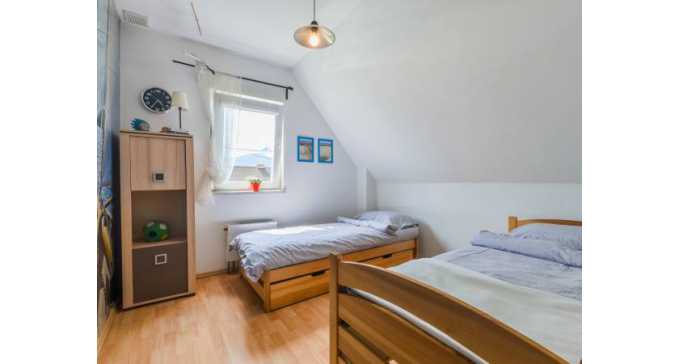 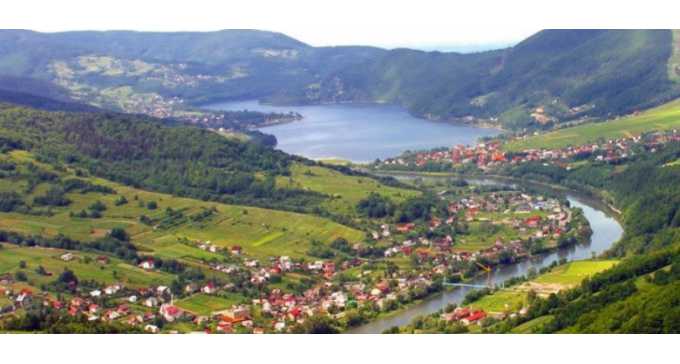 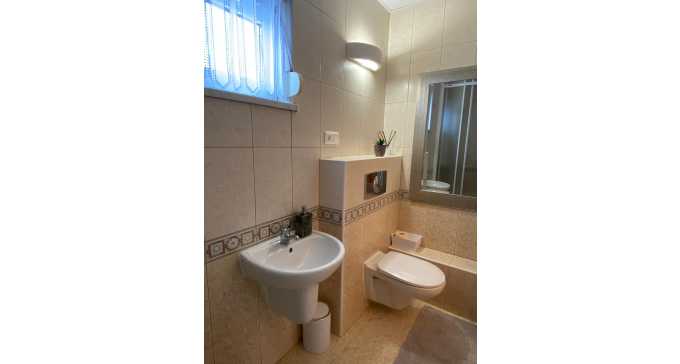 view to the street

upstairs view to the garden 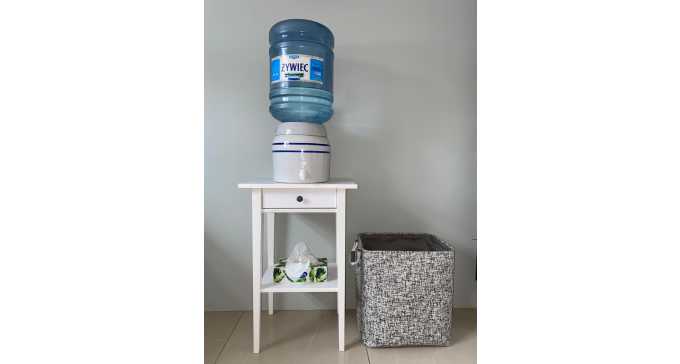 Our house is 1.20h from Katowice airport and ca. 1.40 h from Krakow airport. Both well commuted by train or bus to where we live.
It is a single-family open-space house. On the ground floor there is a modern white kitchen linked to the dining room and a liveing room with a fire place. There is also a spacious room built as an extension to the house with direct entry to the roofed tarrace. There ia also a small hall with a fitted wardrobe and a bathroom with a shower on the ground floor.

The kitchen is will equipped. There`s a fridge, a coffee maker, a cooker, induction oven, gas cooker, microwave, a dishwasher and all the possible kichen utensils, pots and pans.

On the first floor there are 3 bedrooms with a master bedroom containing a huge walk-in wardrobe and an entrance to a huge balcony with views to the mountains. There is also a bathroom with a big bath and a wasching machine.

Moreover, there is an infrared sauna with radio and a lamp to read.

We are very close to Slovakia border.
It`s 2h drive to Krakow
It`s 15 min drive to Żywiec Brewery and Żywecki Lake
It`s 1h drive to Energylandia Zator funfair and theme park
It`s 1,40 h drive to Wieliczka Salt Mine - UNESCO List of World Heritage
It`s 1,30 min drive to Rajecke Teplice in Slovakia hot springs
It`s 2 h drive to Zakopane - and all the srpings and ski lifts there
It`s 30 min dive to many ski lifts nearby with ski couches
there are lots of hilltrekking paths and numerous bike tours
we offer our bikes and a car exchange (Citroen C2)

About our town
Węgierska Górka [vɛnˈɡʲɛrska ˈɡurka] is a village in Żywiec County, Silesian Voivodeship, in the historic province of Lesser Poland. It is the seat of the gmina (administrative district) called Gmina Węgierska Górka.[1] It lies approximately 12 kilometres (7 mi) south-west of Żywiec and 72 km (45 mi) south of the regional capital Katowice. It has a population of 4,206.

Location
Węgierska Górka is located among the hills of the Żywiec Beskids, on the Soła river. For most of its existence, the village, together with Żywiec, was administratively and culturally tied with Kraków and Lesser Poland. Until 1975, it belonged to Kraków Voivodeship. In 1975 - 1999, it was part of Bielsko-Biała Voivodeship. Węgierska Górka is located on National Road Nr 69 from Bielsko-Biała to the border with Slovakia. It has a rail station, on a line from Katowice to Skalite.

History
The village was first mentioned in documents in 1477, when Polish King Kazimierz Jagiellończyk argued with Hungarian King Matthias Corvinus over the shape of the border between the two nations. In 1706, Franciszek Wielopolski opened here a folwark, calling it Węgierska Górka. In 1838 Adam Wielopolski founded here ironworks, and two years later, a blast furnace was completed. At that time, Węgierska Górka belonged to the Austrian province of Galicia, which was the result of the Partitions of Poland. After a few years, the Węgierska Górka Ironworks became one of the largest such enterprises in Galicia. In 1884, Węgierska Górka received a rail connection with other locations, and the village quickly grew in size and population.[2]

In the Second Polish Republic, Węgierska Górka became a popular winter sports center, and a mountain spa. In September 1939, the village was the site of the Battle of Węgierska Górka. Polish defensive fortifications, built before World War II, can still be found and visited here. In 1961 the population of the village was 2,215. A new school was opened on 23 July 1961, and in the late 1960s / early 1970s, a whole district of blocks of flats was built.[2]

We have stayed in Sweden as part of the workaway.com.
We thoroughly enjoyed it!